In advance of Colorway’s show at The Low Beat on 2/12, Greg Haymes from albany’s arts and news blog, Nippertown sent Alex a few questions about a few of his firsts. Originally published in Nippertown on 2/11/16. 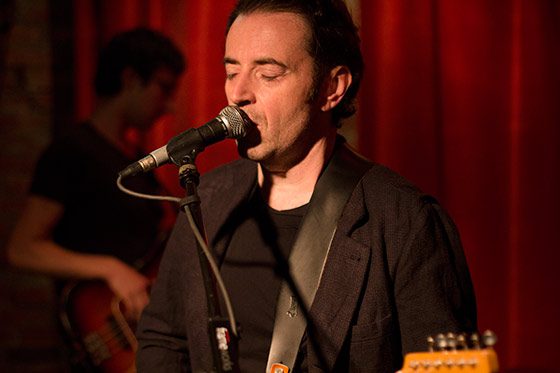 1. THE FIRST ALBUM I EVER BOUGHT WAS … In the town where I grew up (Fall River, MA) we had a supermarket called Almacs. At the end of the checkout aisle was a wire rack of the current LPs on the charts. The album I actually wanted to buy was Tattoo You by the Stones. But the cover scared my mom half to death. I think she worried I’d want to get tattoos because of it. Funny, it took 20 years or so, but she ended up being right. But the first album I actuallybought with my own money was Dimensions by K-tel. It had a mesmerizing orange and gold pseudo-Celtic knot on the cover and featured songs by Juice Newton, Pat Benatar, Billy Squire and Hall & Oates among others.It had the rock, pop and smoothness that only an album that came out in 1981 could provide. I will never forget the feeling of being 11 and handing over my hard earned money – from picking up the dog poop in our yard; I got a nickel for each one I scooped; we had some active dogs – and being handed that giant (to me) glowing orange and gold cover. I ruined that thing within about a week, but the music it held stayed with me – for better or worse – for a lifetime.

2. THE FIRST CONCERT THAT I EVER SAW WAS … My aunt brought me to Sha Na Na many times in my early years. I always loved to see them perform and witness the spectacle of a live show with a ton of performers. I remember my first grand disillusionment when I realized that Lenny Baker (the big sax player with the long hair and beard) had been replaced for one of the shows. How could they do that? Nobody replaces Lenny.

But the first rock concert I saw without my parents was Huey Lewis & the News on their Sportstour in 1984. That night changed me in ways I could never fully express.

3. THE FIRST MUSICAL INSTRUMENT I EVER OWNED OR PLAYED WAS … Like many children growing up in the 1970s, I was handed a plastic recorder in music class in first grade and was amazed that my fingers and breath could make such amazing sounds. I don’t think the people around me were as thrilled as I. But my mother encouraged it, and that led to the violin and eventually the guitar.

4. THE FIRST SONG THAT I EVER PERFORMED IN PUBLIC WAS … Hmm, that is an excellent and extremely hard-to-answer question, and I’m surprised I’ve never had to answer it before. But if you could define “performed in public” as playing for someone other than oneself and family, then I guess the answer would be “Taps.” Yes, that “Taps.” I remember getting my first guitar and tuning it up and plucking the middle strings. You only need to fret one note to play all of the excruciatingly sad funeral dirge, but there I was playing it and smiling ear to ear at my grand accomplishment. I was so happy I called up my girlfriend at the time (I was 10; she was nine and a half) and exclaimed, “I can play the guitar! You wanna hear?” Needless to say she was floored. So yeah, first public performance was a simulcast of “Taps” over a rotary phone to impress a girl. Classic.

5. THE FIRST BAND I WAS EVER IN WAS … We were called Atria, and we played the most classic hits of the early to mid-1980s. Here is one of our promo shots: 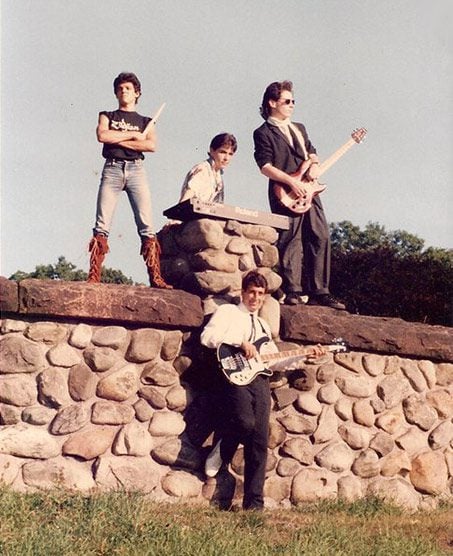 ​The selling point for this pic is you knew exactly who plays what. My Aunt Lynda was our manager. She got us started by playing at Portuguese feasts. She was friends with one of the big Portuguese rockers in town (Marc Dennis), and when his band took their breaks, we would get up and play on their gear. Their breaks started getting longer and longer, and I never knew why until I got a little older. But it was a win-win because they got to do whatever they got to do, and we didn’t have to break down anything. This, of course, is every musician’s life’s goal. We played our high school dance, went through some personnel switches, changed the name to Undercover and ultimately (and dramatically) parted ways one foggy 1987 evening in slow motion to the tune of “In the Air Tonight.”

Alex Johnson straps on his guitar and steps up to the microphone to lead his band Colorwayat the Low Beat in Albany at 8:30pm on Friday. Joining in the festivities will be Hammer Hawk and Kimono Dragons. Admission is $5.

We are super-excited to be part of this show.

If Aretha Franklin & Chaka Khan fronted  Led Zeppelin…..DELTA DEEP is a pure blend of true blues and powerful soul music revisited. Iconic rock band Def Leppard’s lead guitarist Phil Collen, Queen of the Blues songstress Debbi Blackwell-Cook, legendary bassist Robert DeLeo of Stone Temple Pilots, and enigmatic drummer Forrest Robinson have contributed their musical prowess to preserving blues in it’s rawest form. With a blend of rock, blues, and soul the band has managed to create a harmonic symphony of tasty musical treats for the most die hard of blues fans and then some. This group is sure to go down in the delta and in history as they celebrate their bluesy rock-n-soul music heroes and embody the spirit that made those artists an invaluable part of American music history.

Check out their official vid below: